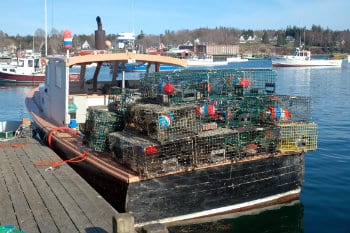 What is a lobster, and how do they grow?

Lobsters are crustaceans, which means that they are invertebrates. Unlike you and me, who have a rigid skeleton inside our bodies to hold us together, lobsters have a rigid shell on the outside of their bodies called an exoskeleton.

Since it’s rigid, the lobster’s body inside can only grow to the limit of that shell. When it reaches capacity, the lobster will molt by forming a complete, new shell right inside of its old one. The lobster will then squeeze out of its old, cramped quarters and spend the next several weeks regaining strength and mobility while its new shell starts to harden up again. Lobsters shed many times per year when they are small, but once legal size they typically shed just once per year in the early summer.

Legal size in Maine is a linear measurement from the eye socket to the back of the body portion of the shell. Lobsters must measure a minimum of 3.25″ and a maximum of 5″ in order to be kept. All lobsters that are too small, or too big, must be thrown back.

What do lobsters eat, and how big do they get?

Lobsters eat live fish, crabs, mollusks and even other lobsters. They grow slowly, taking about seven years to reach one pound, but can grow to enormous sizes. The largest lobster recorded weighed in at over 44 pounds, but bigger is not always better. Since growth slows as the lobster ages, very large lobsters may not shed their shells for several years at a time giving their meat a tougher consistency. 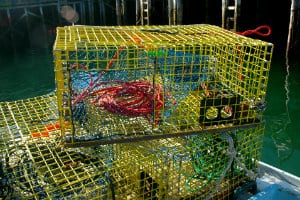 Where do lobsters live, and how are they caught?

Found throughout the gulf of Maine, lobsters thrive in the cold water and rocky bottom that the area supplies. While lobster fishing is a year round occupation, a vast majority of the catch is brought ashore in the summer. When lobsters molt in the late spring they spend several weeks hiding with nothing to eat while they let their new shells harden up enough to protect them. After that long fast the lobsters are desperately hungry, making them easy targets with a baited trap. 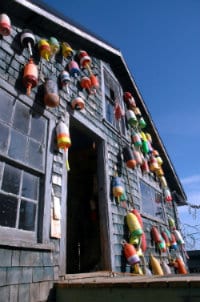 Lobstermen can fish up to 800 traps at a time. Made of metal wire, the traps sit on the ocean’s floor, are baited with herring, and have several entrances designed to let lobsters crawl in, but not out. Traps are hauled up to the boat by a rope, which has one end tied to the trap, and the other to a buoy that floats on the surface marking its location. Each fisherman has a unique color and pattern combination painted on their buoys to designate who the traps belong to.

The Menu Our Neighbors Our Suppliers

See what people are saying about our fresh lobster and seafood!

Want to know more about Thurston's? Our hours, menu, location, etc.? Let us know and we'll be in touch shortly!